There actually isn’t a lot to say about Checking In, the premiere episode of season five of anthology series American Horror Story. Correction: There isn’t a lot of positive things to say about Checking In. Absurdly grotesque, convoluted in plot and yet to provide us with any kind of likeable character other than Wes Bentley, Ryan Murphy and Brad Falchuk’s newest incarnation is, very simply put, silly. Silly in nature and pointless in presence. 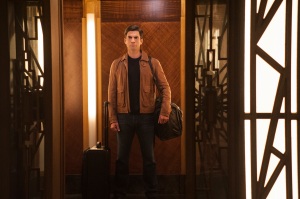 Ouch, yes, I went there. It genuinely feels as though co-creators Murphy and Falchuk have run out of any kind of original idea and have taken odd components from seasons past and thrown them all into Hotel. The violence of Asylum and the strange characters of Freakshow with the location-based claustrophobia of Murder House. The difference being that those elements in those seasons worked. Currently, they aren’t working here. The first episode generally needs to be the stand out and that just currently isn’t the case. Members of the AHS fan canon will likely be enthused by this first installment, those who have been teetering on the border of abandoning the series will probably do so now.

Sarah Paulson is on form yet again as another complex character and seeing Lady GaGa as an actress is a real treat. Kathy Bates used to be a firm favourite but three seasons since her inauguration into the world of ‘Horror Story she has just become stranger and less compelling. The gripping enigma, and engaging characters of times past are long gone, and now the FX show that was once a television phenomenon has become an uncomfortable watch that focuses on unnecessary and seemingly unexplained events. Underdeveloped and cliched, Hotel needs to find a way out of the dark hole it’s so sadly started in.