Director Antonie Fuqua has displayed diversity in his work as a filmmaker. That diversity hasn’t always hit the mark, but one constant trait is a narrative full of grit and a visual that hits you straight in the jugular. Fuqua became a name to remember with his hard-hitting cop drama Training Day, since that effort he has flirted with various other feature films and with Southpaw the director returns to genre filmmaking. The 2015 movie is not a completely rewarding effort but it tackles the sport well and will leave you satisfied.

Southpaw has the story, the leading man – and even the theme song – to please any hardcore boxing fan. Jake Gyllenhaal is an absolute triumph as 4-time lightweight world champion Billy Hope. The protagonist is hungry for the win and loyal to his family, made up of wife Maureen (Rachael McAdams in a short but poignant role) and daughter Leila (Oona Laurence). Hope grew up in the system and stands as a kind of poster child for rebellious youth made good, he rides that wave as one of the most famous sportsmen in the world. If you’ve seen the trailer you’ll know the rest for, unfortunately, there isn’t much touched upon in the full feature that goes amiss in the promotional teaser. 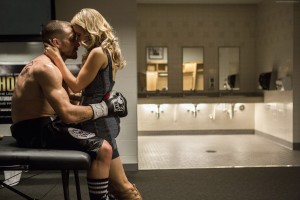 The film follows the formula of most boxing features but when done right this structure is an instant win. As an audience we see Hope go from having it all, to losing it all, to fighting (literally) to attain the former once more. The issue is the slow pace of the first half which eventually picks up once Forest Whitaker’s Tick Wills is introduced. You guessed it, Whittaker is the owner of a gym and he reluctantly becomes Hope‘s trainer. Gyllenhaal shares a touching chemistry with his co-star as together they embark on the boxers journey to emotional recovery. The leading man embodies his character appropriately and while he’s not entirely likeable his charectarisation is real and gritty as hell.

Fuqua knows how to direct his actors and because of this he prompts the best performance possible from all involved, with Laurence and McAdams both putting in stand-out supporting roles. While the ensemble is one of complete strength (and Hollywood appeal) – and a star might even have born in the shape of Oona Laurence – the story by Kurt Sutter lacks in all areas. There are several themes that could have been successfully explored, but the narrative becomes cliched and side-stories are never fully realised. The pacing is all wrong and there’s too much time spent studying a gym, rather than the people inside of it.

This is a good effort but it hasn’t got a patch on recent success story Creed.

In 2005 director Catherine Hardwicke (perhaps better known for her contribution to the Twilight franchise) embarked on a journey into the lives of the infamous – and influential – Z-Boys. Following on from the 2001 documentary Dogtown and Z-Boys, Lords of Dogtown is an exploration of skateboarding legends Stacy Peralta, Jay Adams and Tony Alva during their climb to success. Audiences watch as Emile Hirsch, John Robinson and Victor Rasuk portray the trio as they pioneer classic skating tricks and each respond to success and attention in their individual ways. Heath Ledger provides a somewhat comedic support as Skip Engblom. As Zephyr owner and Z-Boys helmer, Ledger sparks in perfect method mode.

Now ten years old, Hardwicke’s film – set in the 1970’s – encapsulates the spirit of youth and rebellion from the skating trio perfectly. Beyond the charismatic leads, its Hardwicke as director who really needs the praise. To watch Twilight you wouldn’t really believe she was responsible for this and the controversial (yet acclaimed) pic Thirteen. While her stab at the vampire franchise was the best in terms of reaching out to a mass audience – enabling adults to enjoy the soppy love story too – ‘Dogtown showcases the directors stylistic intentions, with a docu-drama feel present throughout. With various locations in the boys ‘Ghetto by the sea’ framed differently, some grainy, some flooded with orange and yellow lighting, and a soundtrack dominated by Bowie and Hendrix, this is not your average sport biography. This is indie film-making at its quirkiest.

the cast of lords of dogtown

The cast is generally dominated by young talent that at that time were mostly unknown. Today, Emile Hirsch is recognized by most, and has gone on to star in an array of quirky cinema. As Jay Adams, the young actor embodies vulnerability, rebellion and an undeniable sex-appeal, and his on-screen energy is so often lacking in actors of today’s contemporary Hollywood. Robinson and Rasuk both provide support but its Ledger and Hirsch’s vehicle. While the rest of the cast don’t quite come up trumps, when together, the laughs and anarchic nature of the Z-Boys takes over and you swiftly forgive any acting pho-pars.

We see the story unfold between the years 1975-1977 and Hardwicke uses a number of montages to round out the slightly overly-long run time of 107 minutes. From skateboarding competitions to the creation of now integral moves on the board, we watch as surfing takes second-place to the new craze and as various companies try to sway Alva and co’ into joining their team. The skating narrative takes centre-stage, and the juxtaposition of almost pixelated ‘recorded’ footage (used at it’s best for close-ups in empty swimming pools) and the generic cinematic style, is coupled well to give the film a lucid visual.

emile hirsch as Jay Adams in lords of dogtown

The story of the Z-Boys is as poignant as it’s ever been, as Jay Adams (‘the original seed’) passed away last year. As the film comes to a close we are given a brief summary of the skaters lives post-Venice Beach and in a simply shot, yet deeply moving scene, you can’t help but wish they could all reunite. Lords of Dogtown‘s integral theme is community, and the community and family that comes with the skating world is always a pleasure to delve into. To see that become fractured as the boys grow up, as each have different priorities – for Jay the most important thing was being able to pay his Mum’s rent – as an audience we feel ourselves rooting for not just Jay, but Stacey, Tony (and even Skip). Peralata penned the screen-play and who else would of done the job better? Director of ‘Z-Boys and a key figure in the skating world himself (he mentored Tony Hawks), the film-maker and writer gives us plenty of insight into what each of the trio cared about the most, but carefully manages not to judge despite the somewhat tumultuous relationship they had.

Catherine Hardwicke’s foray into the world of 1970’s skating may be ten years old, but it looks and feels as edgy as any new-release today. Undeniably under-appreciated, Lords of Dogtown is a fun and subtly moving film that educates us on a time in sport that we may of been previously unaware of. We all wish we could of been a part of that world.