Remakes are popular in the world of cinema. It must be that whole idea of making a quick buck. If done right though, remakes can be a smart move. Soon audiences will see a high-def Point Break reworking and in the next couple of years it will be Christopher Nolan’s Memento. Fun fact: director Nolan and his brother supposedly chose the order of chronology for the feature by throwing a deck of cards with the scenes on down the stairs, the order in which they fell is how the narrative played out. Smart, ey? 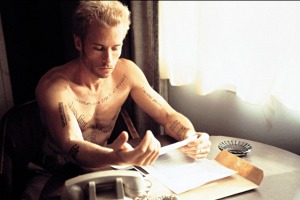 guy pearce as leonard in memento

The big question here is why Memento next? At only fifteen years old, Nolan’s acclaimed thriller is relatively recent. Chosen by critics as one of the best films of the decade following its 2000 release, Memento was honored with Academy Award nominations and garnered an impressive box-office profit; this alone demonstrates the remake as a financially smart move in the world of cinematic reworkings. Remembered for its nonlinear plot-line and exploration of various themes, Nolan cemented himself as a director to be taken seriously with the feature and has gone on to direct some of the best flicks of the last ten years – does anyone understand Inception yet?

Who will helm the project? AMBI  Pictures have claimed the rights to the story and have justified their reason for playing around with the original because “Memento has been consistently ranked as one of the best films of its decade.” Can they capture that response with dipping a toe into the murky world of amnesia and murder or will the brilliance of the original be caught up in glitzy mainstream film-making? Time will tell! Let me know your thoughts in the comments box below.

When I initially heard that Point Break was being remade I did have a kind of glimmer of hope that it would be half-decent. By half-decent I mean, close enough to its original to stay quirky, but adapted successfully for a contemporary age – keeping in tact the messages and themes of community – and consumerism – that Katheryn Bigelow’s triumphant feature encompassed.

Now, I have only seen trailer number one, but it isn’t looking too promising from where I stand. Boasting a pompous budget and startling effects, the concept seems to of changed from small town surfing and local bank robbing to the likes of Interpol, globe-trotting and unrealistic stunts.

Development is obviously integral when it comes to adaptations, but the trailer suggests Warner Bros haven’t just caught on to the success of the original and tried to re-create that, but quite simply taken an already acceptable narrative and run away with it losing, in the process, the essence of the original.

It’s 100 percent too early to judge the entire feature – and trust me, I want to like it- but for now, I approach with a little caution. The mass market will love it. Fans of the original? Perhaps not so much.