While I’ve been vocal since the big reveal of a new series that I’m not keen on the Fear the Walking Dead title, in the build-up to Sunday’s pilot episode, I began to come around to the idea of a brand new The Walking Dead spin-off. Penned as a sister series, FTWD brings audiences a bunch of new characters, a vibrant LA setting, and an insightful look into the build-up to the apocalypse. The Walking Dead begins in the midst of the outbreak- most people have already been eaten or turned, and we are placed with just a handful of survivors, with little in the way of clues or answers regarding the initial virus. This in itself raised lots of questions for members of the fan canon, more so now that the Robert Kirkman mega-series is about to go into its sixth season. Because of the total success of the graphic-novel adapted AMC series, I was pretty doubtful at how original, compelling – and even enjoyable – Fear the Walking Dead would be. It turns out, following the 90 minute premiere episode, it’s pretty damn good. To that, I let out a sigh of relief as I begin to eagerly await the next installment. 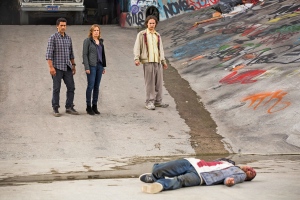 curtis, dickens and dillane in fear the walking dead

The whole idea that this prequel begins right at the start of the outbreak is such a refreshing approach to a genre which is still loved by many, but tired in several aspects. It’s rare to watch an undead project that gives its audience the low-down from the beginning moments of what caused humans to become flesh-eating monsters, and to see writers Kirkman and Dave Erickson work with that here is an exciting turning point for this category of entertainment. Gale Anne Hurd and David Alpert are attached as executive producers, and while the majority of WD‘s crew have turned their attentions to the making of this new series, we are inundated with a host of unfamiliar faces. With no Andrew Lincoln or Norman Reedus in sight, we dive into the turbulent world of 18 year old heroin addict Nick (Frank Dillane), his worried mum Madison (FNL alumni Kim Dickens), his sister Alicia (Alycia Debnam-Carey) and new step-dad on the scene Travis (Cliff Curtis).

Appearing as a drama series and containing few familiar tropes of the horror genre, Fear the Walking Dead has boldly set out to become something of originality. While the ‘Walking Dead comparisons will remain for the first few episodes, expect Kirkman’s escapades into the world of Hollywood zombies to surpass expectations and become independently – and rightfully – known as its own work. Clearly a slow-burner, don’t expect tonnes of gratuitous gore and a decaying cityscape all in series one, but what you can get geared for, is a character-driven narrative that concentrates on relevant societal themes. I won’t give anything away in terms of spoilers, because it needs to be seen from a fresh perspective, but if the remaining five episodes can shape up to be anything like this initial introduction, we are in for a televisual treat. It’s nice to be pleasantly surprised, right?