What is there to say about Amy? A film directed by SENNA film maker Afia Kapadia that, simply, tells the story of Amy Winehouse. A young woman whose career was magical but whose personal life was tragic. Kapadia’s story of the jazz artist is heartbreaking with an emotional undertone that is palpable from start to finish. Those final moments are possibly the saddest scenes seen in cinema this year, and the archive footage that displays the journey up until the singers last days honest and unsettling. The film itself is far from perfect, with a messy chronology and an uncomfortable amount of shaky footage, but the good outweighs the bad (cinematically speaking), which makes Amy a triumph in finally, and frankly, shining a light on the enigma that was the singer.

Archive footage and photographs from early on in Amy’s life to her death portray her for the woman she really was; bashful, witty, with a personality larger than life. She fell deeply in love with bad men, who in turn latched onto her and refused to let go. Amy was scarred from family problems and romantic woes as she battled depression and bulimia, all of the while she screamed out for help from those around her. Kapadia doesn’t necessarily judge any of the characters in the singers life, but yet again he doesn’t really need to – Amy quietly, visually, represents who let her down. Kapadia is sure not to inject his personal opinion into the feature but his artistic vision is seen throughout. Amy narrates as her gigs and her private life lead and its this culmination that lends to this massive sense of heartbreak. For Amy did not want, and could not cope, with fame, but fame still found her. There’s an obvious juxtaposition in tone, from the beginnings of Winehouse’s debut indie album Frank, to the release and success of Back To Back – an album that catapulted the North London girl to undeniable notoriety. 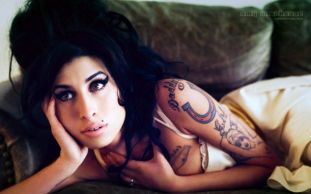 Along her journey to musical success Amy was by the side of a number of influential people. That influence was not all good. Childhood friends Juliette, Lauren and Nick speak of their pain as they pushed to help Winehouse as her father, Mitch’s, grip became tighter the brighter the spotlight shined. Fellow musicians Mos Def and Salaam Remi share their memories of the singer and recount the way in which Winehouse had them spellbound by her talent and her personality. Amy was so loved, but it’s fair to say that Kapadia also believed she was – metaphorically speaking – so alone. Spectators watch as professional rehab doctors talk of Blake Fielder’s want for drugs, a thirst that lent to him denying Amy a private rehabilitation – which, of course, never surmised. We watch and witness Amy on holiday as a teenager eating food and laughing with friends as her mother remembers the moment she revealed she was a bulimic – to no responsive action. Amy was failed by those that should of pushed for her health and her sanity, and that is the takeaway message from this devastating film.

You come away from Asif Kapadia’s feature emotionally exhausted. What a special person Amy Winehouse was, to have left this earth so early. You see the truth behind those memorable lyrics, and hear the pain in Amy’s voice as she so honestly discusses her artistic verve with others, and Kapadia runs with it. The film is not a glitzy or glamorous depiction of her world, it’s the life she led and the trouble she lived with; it is Amy herself.

Everyone appreciate a music biopic. More then a music biopic, everyone loves a music documentary – especially when it focuses on an instrumental member of the industry. This summer sees the release of two pivotal films about the lives of two musicians who changed the face of music.

First up for a cinematic release (followed by a television premiere on American network HBO on the 4th May), Kurt Cobain: Montage of Heck. Directed by Oscar nom Brett Morgen, the feature length documentary promises to explore Cobain’s life with a never before seen intimacy, with archive footage and unheard songs which are reaching the public now for the first time. Morgen has coupled animation with interviews and home video to portray Cobain how he was to his friends and family – and how he has never been seen before by his hoards of loving fans around the world. ‘Montage of Heck had it’s premiere at the renowned Sundance Film Festival and initial word has been positive. Get set for a whole lot of eye-opening footage – and a few tears – as the world gets ready to finally learn a thing or two about Kurt Cobain.

After the frenzy calms down, audiences can prepare for the up and coming Amy Winehouse documentary (yet untitled) set for a July 3rd UK cinematic release. Asif Kapadia has taken the helm as director, with a look into the troubled singers life both personally and professionally. Winehouse became a British treasure during her time as a musician, when she won six Grammy’s and an Ivor Novello Award along with a host of others. Since her death, a statue has been erected in Camden and her family have set up The Amy Winehouse Foundation, a charity in aid of her memory to help those suffering from alcohol and drug addiction. There is no trailer as of yet for Kapadia’s film, which will surely shortly follow this most recent update. Expect unreleased songs, yet-to-be-seen archived footage and some heart-rending personal accounts from those closest to her.