Nine years after Adulthood and ten years after Kidulthood comes the final instalment of the franchise, Brotherhood. They bare similar names and follow similar themes but audiences are as interested in the inner-city narrative today as they were upon its original release. Why are we so enthralled by youths behaving badly? Is it Noel Clarke’s determination as actor/director to showcase society’s pitfalls and its effects on the young? Or do middle-class cinema-goers just enjoy watching a glamorised version of those who live just one or two boroughs away? Whatever the reason for this franchise’s continued success is, frankly, irrelevant for it captures the attention of an audience and it showcases the talents of bright British stars on the rise.

In Brotherhood Clarke’s Sam is married with two children, he works several jobs to provide for his family in a nicer neighborhood than we’ve seen him in before and he does what he can to stay clear of trouble. Is he an alien in this world? When his brother is shot in a nightclub and an old enemy returns from prison for revenge Sam must decide whether to acknowledge his violent past or run and suffer the consequences. Neither option being the preferred. It’s a story of change, and accepting that change. Most interesting in this instalment is the realisation that Sam, who murdered a teenager in the first film and somehow found redemption in film two, is not a nice man. He cares about his family and he wants to do right (after years of doing wrong) but he leads with violence and his morals are questionable. Brotherhood and Adulthood are character studies of a leading man who began life as an antagonist but somehow developed into a protagonist through careful writing and the positioning of harder, darker wannabe gangsters. 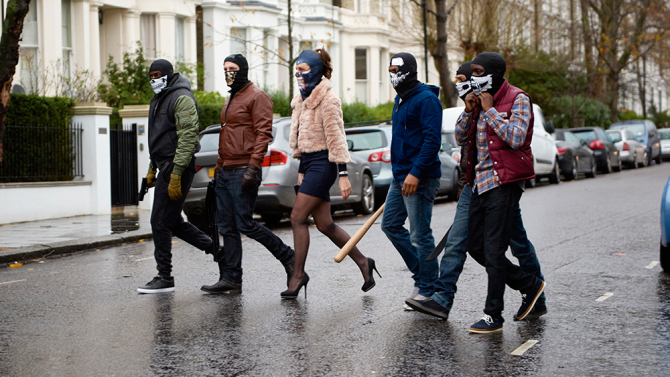 ered but it gets the job done. Brotherhood allows its audience closure and this in itself is enough to please adoring fans of the social drama. In the ten years since Kidulthood came crashing onto our screens shocking parents and affecting adolescents, we’ve seen an array of London estate dramas that focus on angry young men and the women who follow. Kidulthood was gritty and disturbing because we knew it wasn’t far from reality, its soundtrack was a who’s who of UK’s top rap and grime artists and it was undeniably British to the core. Since this time the genre has evolved but its two sequels perhaps haven’t. We’ve become desensitised to the gritty violence, and the continual degradation of young women is as offensive as ever without any take-away commentary behind it. Brotherhood differs from its predecessors in that there are one or two strong female roles but these characters are present because of their entanglement with men and don’t have a whole lot of screen time to themselves.

Compared to the likes of Channel 4’s superb urban drama Top Boy, Clarke’s film doesn’t compare in style, direction or story but it does serve as a satisfying end to an iconic series of Brit films. A flawed but necessary entry – with a brilliantly unexpected turn from Stormzy – Brotherhood continues to demonstrate the strength of low-budget filmmaking with a cast of relatively unknown stars.