In Ang Lee’s visual masterpiece famed warrior Li Mu Bai (Chow Yun-Fat) is charged with finding the Green Destiny; a treasured sword which has been stolen by his nemesis Jade Fox.

Released in 2001, Crouching Tiger, Hidden Dragon was a success both at the Box Office and with critics. Ang Lee directed a foreign language film that appealed to mainstream western audiences; a true triumph in itself. It also launched the Hollywood career of Zhang Ziyi; an actress who’s captivating performance as Jen cemented her as one of the finest talents seen in years.

While every film included in 1001 Movies was carefully selected, the inclusion of Crouching Tiger is one that doesn’t need deliberating. Culturally important (one article on the film boldly, and rightly, declares ‘America had never seen anything like this before’) and sublimely shot and choreographed, Lee’s delicate film balances moments of spectacular violence with quiet, pensive romance. Indeed, a film for everyone – which is rarely the case with world cinema – the feature is a how-to in enticing audiences to see something new. 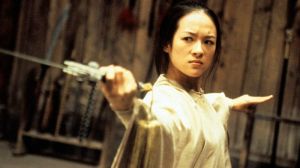 Essentially an action film, there are plenty of awe-inspiring martial arts moments that are both superbly choreographed and genuinely flawless. There are three stand-out scenes in a film which is, of course, entirely unforgettable, all featuring Ziyi as a master martial artist, including a stunning fight which includes ‘flying’ across a forest of bamboo. It’s breathtaking, and wholly original.

Crouching Tiger successfully shakes up perceived gender roles too; both Ziyi and Michelle Yeoh play talented martial artists and are often superior to their male peers, this in itself is an important aspect of a multi-layered movie which goes against convention to deliver an astounding cinematic experience.

The film also serves as a contemporary introduction to world cinema alongside the likes of Hero, House of Flying Daggers and A Bittersweet Life (none of which are included in 1001 Movies but deserve mentions here). While Ang Lee’s epic covers all bases – romance, history, action – it’s most important feat was in introducing new audiences to a genre of incredible filmmaking they hadn’t previously been privy to.

Accessible, visually-clever, and simply a whole lot of fun, Crouching Tiger is a must-see.