Ryan Murphy and Brad Falchuk are back with another anthology series. Not dissimilar to the popular American Horror Story, Scream Queens is a blood-soaked ‘comedy’ that focuses on the New York sorority house Kappa Kappa Tau. It’s ludicrous and all style over substance but returning fans of AHS will likely stay tuned in for the remainder of the first season following the two-part opener. There are two reasons for this: One) Emma Roberts is undeniably in her element as the spoiled Chanel and despite the problematic issue of her being too over-the-top to be likable, Roberts is a great addition to the series. Two) The presence of Jamie Lee Curtis is nostalgic for true horror fans and you can’t help but reminisce about slasher classics such as Halloween and Scream. 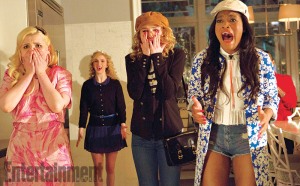 the cast of scream queens

Ian Brennan has co-wrote the series with directors Murphy and Falchuck and the the first season is focusing on a murderous sorority. Starting in 1995, audiences watch as a pledge gives birth and dies at one of the houses parties due to their self-loving mixed-up morals. Fast forward twenty years later and you have a serial killer dressed as a red devil on the loose. Throw in some casual racism, cliched character representation, and homophobia and you’ve got yourself Scream Queens. The next four episodes will surely put the oh-so important narrative pieces together but whether or not the majority of the audience will stick around come the final? Who knows. The first two installments lacked the engaging quality and flair of other Murphy/Falchuk collaborations  and the ensemble – and the eclectic soundtrack – are two of the only components keeping this series together. Clueless meets I Know What You Did Last Summer springs to mind.

While Scream Queens doesn’t match up to the best of the genre, it does succeed in several areas. It’s trying too hard to compete with the best, and the shows demographic is seemingly limited but the ensemble mix together well and there are a lot of familiar faces on-screen. Oliver Hudson, Abigail Breslin, Nick Jonas, Ariana Grande – to name just a few – are all impressive in their respective roles and the added star power adds wit and personality to a slightly flat narrative. If you are wanting originality, you won’t get it with Murphy and Falchuk’s newest televisual development. Scream Queens will certainly serve as a guilty pleasure though, and it can only get better from here, right?

One thought on “Scream Queens: Pilot and Hell Week, review”