While Freak Show hasn’t yet been the best example of AHS on super-shiny form, this weeks episode (Edward Mordrake Part 2) was decidedly better then what we’ve seen so far. Some back stories were unleashed, and they were tough. The story of Elsa‘s history, and how she became an amputee was, for me, a little too much, and its this kind of storytelling that pushes one away from wanting to watch. Black and white scenes of tortuous sexual acts ending in the filming of a snuff film was enough to make me question why I stick with AHS. Having said that, this was a five minute juncture in a fifty minute episode, and to finally gain some insight into some of the acts at the show was certainly interesting. Mordrake, despite his malevolent intentions, may just be the character to breathe life back into Freak Show, somewhat reminiscent of a Murder House ghost. If there’s one negative to pick with the scenes in which Mordrake saves the show, its the green fog that accompanies him (hammer horror rings a bell, and although that’s most probably the intention for makers, it takes away from the serious nature of the show). 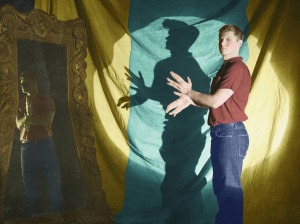 Unexpected in this weeks offering was the rather sad back-story of the murderous Clown. His dirty costume, and blood-soaked mask are often enough to make you turn away by the time his scenes come round, and seeing him as a clean, and almost child-like performer before this was an intriguing juxtaposition (one which almost produced sympathy from those watching). Although what has previously happened to him doesn’t justify or even explain his psychotic activities, a look into the past is always AHS’ strongest moment. And as we say goodbye to, a character who has definitely been one of the most hair-raising antagonists of AHS, Dandy, perhaps becomes a new one (that’s right, the annoying, no-one-cares Dandy).  I think what can weaken the show as a whole is not giving enough screen-time to some of the strongest actors. Here a particular actor is certainly in mind, and you can easily guess who – Evan Peters of course. Whether he’s playing teenage ghost Tait, or Frankenstein style monster Kyle, Peters shines in these varying roles (and is so easily loveable in them). As Jimmy, he’s yet to have his moment in the spotlight, but the burgeoning chemistry between him and (off-screen girlfriend) Emma Roberts’ Esmerelda adds a nice touch to an often dark and slightly uncomfortable series.

What appears to be adding to the disappointing moments of series four is the judging and balancing of which characters are on screen, for how long, and what is taking place or being learned during this time. Angela Bassett has barely had any real air-time and Dennis O’Hare has featured in only two episodes (and collectively for less than fifteen minutes), these actors are what have helped make previous seasons’ so great, and the reason why Freak Show is so lacking. It’s important to note that while I’m certainly a little morose at the route this series has taken, I still think, on a whole, AHS is a great example of television at its best. We are only four episodes in, and the arrival of Gabourey Sidibe and Neil Patrick-Harris is yet to be had (both will add strength to an already beloved cast), and there’s still a lot to be understood about the group of outsiders Freak Show focuses on. Lastly, a turning-point for Jimmy and the rest finally came around, and not only do they have a sold-out show but a new found respect from the locals. Some interesting tweaks to the narrative meant episode four gave us perhaps a lot to look forward to (or, more appropriately, a lot to be apprehensive of).